The Brain Clock: Comming out of the neurotech closet 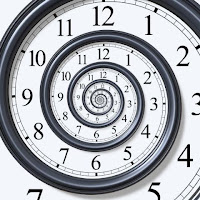 [Note.  This post was originally written to be distributed to a number of professional listservs.  I then decided against that idea, and instead, produce it here as a blog post.  I will be sending brief FYI (with links to this post) to a number of professional listservs.  So, it sounds like a listserv post...which it originally was...but it is now a blog post.]

Anyone who has followed my blogs knows that during the past 5 years, aside from my IQ's Corner blog, I have nurtured a sister blog addressing mental timing research (the Brain Clock blog..previously nicknamed the IQ Brain Clock).

My interest in the brain clock, and other brain training/fitness technology, piqued as a result of my involvement (very skeptical at first) in a study directed by Gordon Taub in 2004.  Taub, myself, and one of the best stat/methodologists in school psychology (Dr. Tim Keith) published an article in Psychology in the Schools (Taub, McGrew & Keith, 2007) that reported that Interactive Metronome (IM) training resulted in significant increases in the fluency of basic reading skills when compared to control group subjects (randomly assigned treatment and control groups).  The results floored me...as I had become a huge skeptic of non-academic interventions for academics...as I had many scars from the early LD "process remediation" treatment days of Frostig, ITPA psycholinguistic training, Doman-Delacato motor pattern retraining, etc.).  I thus set out on a 5 year mission to explore the brain clock/mental timing research literature, which I have posted portions of at the Brain Clock blog.  I needed to now why such an elegant neurotechnology could have positive impacts on such diverse domains as ADHD, golf, tennis, reading, and stroke rehab.  It had to be working on some kind of cognitive domain-general mechanism.

I have become convinced that this apparently simple (it is not so simple if you give it a try...it places huge demands on attentional control and executive functions) neurotechnology may be (my working hypotheses) fine tuning the resolution of the underlying human brain clock (or system of clocks), and might be increasing the resolution of neural oscillations as per Jensen's neural efficiency hypothesis.  The brain clock literature has huge overlaps with the contemporary g and executive functions literature, and especially exciting research by Rammsayer et al regarding "temporal g" (which appears more highly correlated with psychometric g than Jensen's reaction time g).  These parallel sets of research all focus on similar neuro constructs and brain networks (the central executive network and the salience/attentional networks...as per recent research on large scale brain networks....the other being the default mode network; see Bressler and Menon, 2010; Large-scale brain networks in cognition: Emerging methods and principles, Trends in Cognitive Science, Vol 14, Issue 6, pp 277-290).

I won't go into greater detail.  I am going to provide the detail via a series of blog posts at the IM Home web site ---  via the blog feature.  My blog posts will be written for the lay audience, and will contain links back to my Brain Clock blog for the harder science.  My first post is now up and availale (click here)


CONFLICT OF INTEREST DISCLOSURE - I am not an employee of IM but serve as a paid external consultant.  Also, any statements or positions I make do not reflect the views of the coauthors of the WJ III Battery, a battery of cognitive and achievement tests where I am a co-author.  This disclaimer also applies to Riverside Publishing, the publisher of the WJ III.


Thank you for reading