Yet another research study suggestive of a link between mental/temporal timing/processing and dyslexia. This time fMRI evidence that suggests changes in brain function due to a timing-based letter-sound program. Check it out. Click here for other dyslexia related posts at this blog and here for posts at my sister blog---IQ's Corner.

Thanks to Mind Hacks for the tip re: the YAY Serotonin t-shirts that are now available for purchase. Just in time for my holiday shopping

Posted by Kevin McGrew at 7:43 AM No comments:

More on brain training for the eldery

Sharp Brains has a more detailed post regarding the topic I blogged about yesterday....new research demonstrating positive effects for brain training in the elderly. Check out SB's post....I consider SB to be the "Ralph Nader" or "Consumer Reports" regarding the growing brain fitness industry.

Posted by Kevin McGrew at 9:55 AM No comments:

Brain training for elderly - one hour a day?

NPR has a report of a recent study that suggests that one hour a day of intensive brain exercise can improve thinking and memory. Thus study used the Posit Science Brain Fitness Program. The sample size looks to be quite decent (n=400). Caveat...the study was funded by the developers of Posit Science. That aside, I'd like to review the empirical research report when it is published. 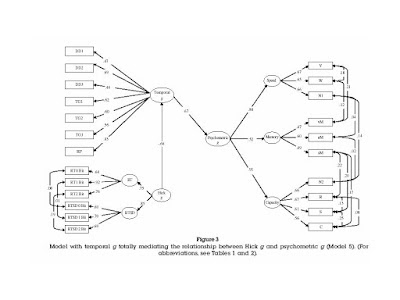 My first post to the IQ Brain Clock was re: an article published in the journal Intelligence that suggested the human brain may have an underlying domain-general brain clock. I was very excited about the possibility of a "temporal g" (general intelligence) brain mechanism, a mechanism that may explain a diverse array of research findings regarding the importance of temporal processing and human performance in many domains. This first article (by Rammsayer and Brandler, 2007), in large part, was the impetus for me starting this humble specialized blog.

I am excited to report that Rammsayer and colleagues have followed up this original study with one based on a larger sample (including the sample in the 2007 publication). The new, and IMHO very important, article is:
Abstract
A few comments (some exact quotes..others paraphrased and edited) from the article (with emphasis by the blogmaster):

A few final comments. First, the importance of these findings, IMHO, can't be overstated. The reaction time g research is based on a massive literature base and is the dominant theoretical explanation of a possible neural basis for general intelligence (g). The fact that two studies now suggest the temporal g may be more explanatory than reaction time g is a huge deal! Conversely, the presence of only two research studies argues for caution in making too much of these findings. However, as I've written elsewhere, there is a large body of research across disciplines that continues to point to the importance of temporal processing and the possibility of an internal brain clock. Check out the IQ Brain Clock EWOK for a sample of this body of literature.

Another article suggesting a link between interventions that improve mental timing (the brain clock) and rhythmicity (check out "rhythm perception and production" branch at IQ Brain Clock temporal processing EWOK) and important human outcomes---this time, improved gait performance in children with spastic CP. Although different, the essence of the RAS (Rhythmic Auditory Stimulation) training seems to overlap with the essence of syncrhonized metronome tapping (which I have written about, primary in the context of the Interactive Metronome product).

Posted by Kevin McGrew at 7:33 AM No comments: