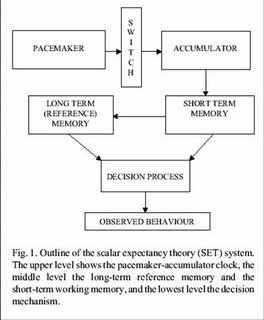 I previously made a couple of tease posts re: the predominant theoretical model of mental interval time-keeping (viz., the pacemaker-accumulator model). It is now time to "buck up" and provide my brief overview. Above is the best figure I've found to date (click here to see the original source article).

Human behavior based on the perception and timing in the range of seconds-to-minutes has traditionally been explained bythe pacemaker–accumulator model. The pacemaker-accumulator model (PAM), which is based on scalar expectancy or timing theory (Church, 1984; Gibbon et al., 1984; Meck, 1983), “is relatively straightforward, and provides powerful explanations of both behavioural and physiological data” (Buhusi & Meck, 2005; p. 755).

Briefly, the PAM model implicates the processing of temporal information via three synchronized modular information processing systems (see Buhusi & Mech, 2005.) The “clock” system consists of a dopaminergic pacemaker that regularly generates or emits neural ticks or pulses that are transferred (via a “gaiting” switch) to the accumulator, which accumulates ticks/pulses (neural counting) that correspond to a specific time interval. The raw representation of the stimulus duration in the accumulator is then transferred to working memory, a component of the PAM “memory” system. The contents of working memory are then compared against a “reference standard” in the long-term (reference) memory, the second component of the PAM memory system. Finally, the “decision” level of the PAM is conceptualized to consist of a comparator that determines an appropriate response based on a decision rule which involves a comparison between the interval duration value present in working memory and the corresponding duration value in reference memory. In other words, a comparison is made between the contents of reference memory (the standard) and working memory (viz., are they “close?”).