The brain clock in children: How early? 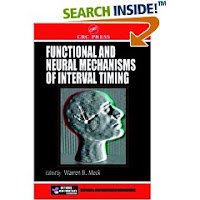 Again, more from my reading of Meck's edited text on the brain clock and interval timing. This time from Sylvie Droit-Volet's chapter on "Temporal experience and timing in children." Dr. Droit-Volet has published extensively on the developmental aspects of the brain clock in children. [I've got at least a half dozen of her articles in my "to read" folder....I just don't have enough time]

Below are some select quotes/conclusions. The bottom line (from my reading) is that the human temporal processing unit (aka. the brain block) is present in young children and research suggests it functions, in most respects, similar to the adult brain clock. One similarity is that auditory information appears to be processed more efficiently by the human brain clock. Also, attention is a critical ability in temporal processing. Below are some tidbits from the chapter (emphasis added by the Time Doc blogmaster).

Powered by ScribeFire.
Posted by Kevin McGrew at 9:00 AM