How many internal brain clocks do we have? 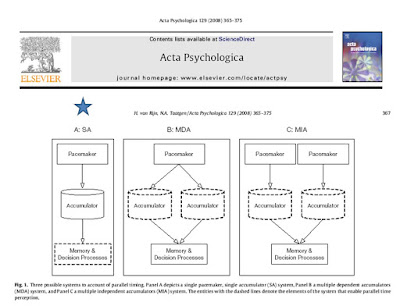 Thanks to BPS for mentioning a research study ("How many clocks do we have") I apparently missed in my routine literature searches. The reference for the article, as well as the key figure, is presented above (double click on image to enlarge).

The research study was designed to investigate how humans can track multiple or different time intervals simultaneously. Three different type of hypothetical models were posited (see figure above). One is the classic pacemaker-accumulator model (which has spawned considerable research) with a single pacemaker and accumulator, the second is a model with a single pacemaker but multiple accumulators, the third is s multiple timing system (multiple sets of pacemakers and accumulators). You can read the detailed results, but the bottom line is that the authors concluded that their study favored the classic pacemaker-accumulator model (starred in figure above)

Another aspect that I found as least as interesting is that our findings strongly suggest that the internal representation of time is not linear. The nonlinearity clearly left its mark when multiple intervals had to be estimated. It is even this effect that most strongly indicates that humans have, as you mention in the entry, just a single "brain clock".

Pacemaker - so be it! But what farther is? How about frequence in subjective times?