The IQ brain clock: Role of basal ganglia and cerebellum 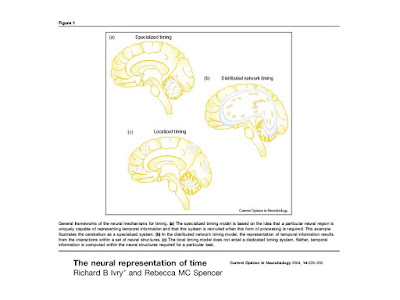 In a prior post I drooled over the means by which he explained possible different neural models of temporal processing (the IQ Brain Clock) via visual-graphic diagrams. As a result of his most recent article (see prior post link above), I went and found an earlier 2004 publication (with Spencer) that again presents an excellent visual-graphic explanation of hypothesized different neural timing models (see figure above), but more importantly, presents a very nice visual-graphic explanation of the hypothesized role of the basal ganglia (and dopamaine), which have been repeatedly implicated in mental timing and such clinical disorders as Parkinson's (see figure below). I've always known that the basal ganglia play a prominent role in mental timing, but have never been able to grasp (probably reflecting my limitations) the possible "why" or underlying mechanism. They offer an interesting and understandable hypothesis. 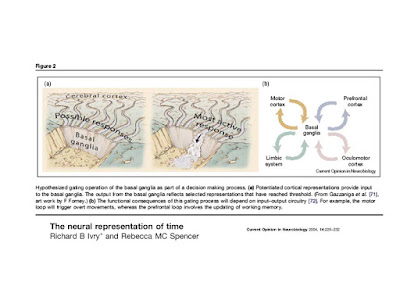 [double click on image to enlarge]
In the Ivry and Spencer (2004) article in Current Opinion in Neurobiology, the authors suggest that the basal ganglia works like a gating mechanism....which I have compared to the switch operator function in a railway system (see PPT slide show). According to the authors, who also prominently feature the cerebellum in brain clock timing system models:

An excellent and brief article. I will be adding it to the "key timing articles" link section of the IQ Brain Clock.