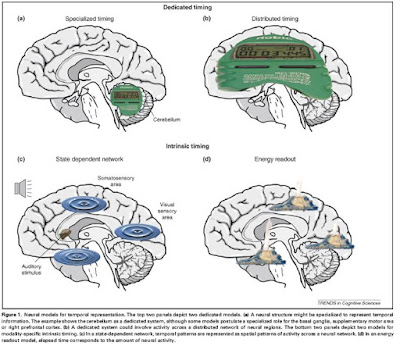 [double click on image to enlarge]
Damn I love the journal Trends in Cognitive Science. It routinely publishes concise articles that circumscribe the state of the knowledge in important areas of human cognition/intelligence. I just finished reading yet another outstanding article ("Dedicated and intrinsic models of time perception") by Ivry and Schlerf (2008) (click to review)

Throughout the past year I've posted material regarding different neural models that have been advanced to explain the IQ brain clock (temporal processing). I've never felt I've done a good job in pulling all of this together. These authors do an exceptional job in describing the four primary hypothesized models that have been advanced to explain the neural mechanisms underlying the human brain clock. More importantly they do so which the aid of great visual-graphics (see the one above). I liked the article so much that I've added it to the "key research articles" section of this blog and have also added Dr. Ivry to the "mental timing scholars" link section.
A few tidbits extracted (directly) from the article, some that reinforce information posted at the IQ Brain Clock over the past few years---and some that is new. italics added by blogmaster: