Interactive Metronome and meditation both quiet the wandering mind? 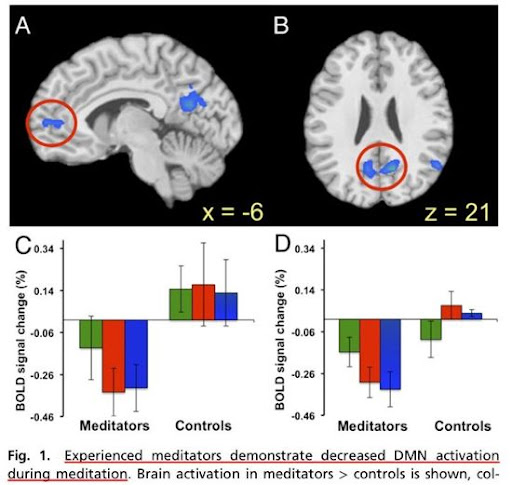 Is there similarity between the controlled attentional focus required by the Interactive Metronome (IM) neurotechnology training and that attained by experienced meditators?  Emerging scientific evidence suggests the answer is "yes."

In a prior post I suggested that the requirement to quiet my unquiet or busy mind, via controlled focus on the IM auditory feedback cow bell tone, might be similar to the sense of being "in immediate awareness" as described by those who meditate.  Furthermore, I hypothesized that both IM and meditation training might be training the mind to silence the ever-present random self-talk of the default brain network.  By silencing this network, it becomes possible to attain singular focus on a stimulus or immediate experience.  The constant wandering of our minds, which can be focused on both positive and negative thoughts and ideas, can be trained to disappear by invoking certain executive functions (our personal brain manager) and high levels of attentional control.   The video of an experienced meditator (see link above) watching identical visual images in both non-meditative and meditative states provides clear evidence that the networks of the brain function differently during these two different states.

In this context, I was excited to read an article in the prestigious Proceedings of the National Academy of Science consistent with my hypotheses and experience.   In Brewer et al.'s Dec 13, 2011 PNAS article "Meditation experience is associated with differences in default mode network activity and connectivity", the author’s state:

Many philosophical and contemplative traditions teach that 'living in the moment' increases happiness. However, the default mode of humans appears to be that of mind-wandering...and with activation in a network of brain areas associated with self-referential processing. We investigated brain activity in experienced meditators and matched meditation-naive controls as they performed several different meditations (Concen-tration, Loving-Kindness, Choiceless Awareness). We found that the main nodes of the default-mode network (medial prefrontal and posterior cingulate cortices) were relatively deactivated in experienced meditators across all meditation types...Our findings demonstrate differences in the default-mode network that are consistent with decreased mind-wandering. As such, these provide a unique understanding of possible neural mechanisms of meditation.

These authors suggest that we spend approximately 50% of our time in the mind-wandering default mode! I believe that individuals differ in their amount of spontaneous mind wandering.  For those who want to read the original article, I have provided access to an annotated version via IQs Reading feature.

IM can result in or contribute to improvements in language processing, social communication, planning and sequencing etc.