The authors describe the brain regions involved in the process of intelligence using as a basis, the models of the theory of frontoparietal integration (P-FIT Model). They also correlate the model described with functional areas of Brodmann, integrating them into the tertiary brain areas and address the subcortical structures involved in cognitive processes, including the memory. The studies performed by functional magnetic resonance, also unmask various regions related with intelligence, neither previously described by Brodmann nor even in conventional models of learning. The anterior insular cortex presents itself as the most recent tertiary area to be considered. Subcortical structures, when injured, mimick injuries to the cerebral cortex, demonstrating their great participation in cognition. The topographies of aphasia and the functioning mechanisms of the bearers of learning disorders, including dyslexic, dysgraphia and dyscalculic should be reconsidered. A better understanding of this topographic anatomy may clarify the mechanisms used in those individuals with cerebral lesions. 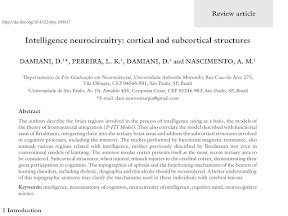 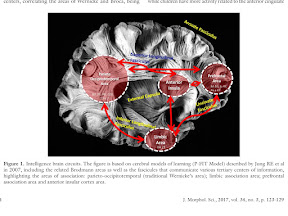 - Posted using BlogPress from my iPad
Posted by Kevin McGrew at 5:13 PM