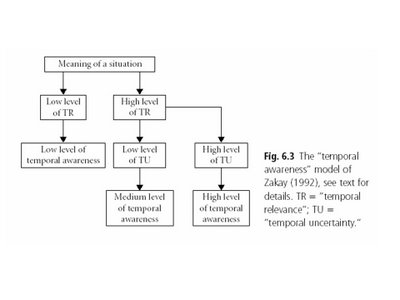 What are some possible explanations for these different subjective perceptions of time? According to Zakay (1992; I drew this information from a chapter by Wearden), the answer may lie in the construct of temporal awareness, which is derived from how important time is during a task (temporal relevance) and how much uncertainty an individual has about the duraton of certain events (temporal uncertainty)

As per Wearden's chapter (note - examine the model figure above to help understand the text--italics emphasis are the blogmasters):

So....the next time you are in a situation where time seems to "drag on, and on, and on....", or, conversely, time seems to "fly"...if you are wondering why you have such different subjective perceptions, remember the above model figure and do a self-assessment of your level of "temporal awareness"...it might, at least, help you cognitively cope/understand with your time perceptions.