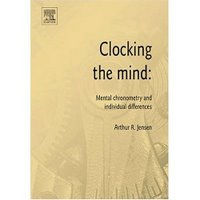 Thanks to an annonymous commenter for reminding me of the publication of Arthur Jensen's new book: Clocking the Mind: Mental Chronometry and Individual Differences.

As mentioned in a prior post (click here), Jensen is "the" name associated with the use of reaction time measures in the search for the essence of g (general intelligence). Although my prior post was in reference to an "in press" article that suggested that measures of temporal processing (vs. reaction time) may represent a temporal g ability that may be equal to or better than Jensen's reaction time paradigm, there is little doubt that Jensen's treatise will be relevant to understanding mental or interval time keeping. I'm anxious to see if Jensen draws any links to temporal processing and elementary timing tasks.

Below is the description for the book provided by the publisher (I lifted this from Amazon.com)

Mental Chronometry (MC) comprises a variety of techniques for measuring the speed with which the brain processes information.

First developed in mid-1800, MC was subsequently eclipsed by more complex and practically useful types of psychometric tests stemming from Alfred Binet. This class of mental tests, however, has no true metric relating the test scores to any specific properties of the brain per se. The scores merely represent an ordinal scale, only ranking individuals according to their overall performance on a variety of complex mental tasks. The resulting scores represent no more than ranks rather than being a true metrical scale of any specific dimension of brain function. Such an ordinal scale, which merely ranks individuals in some defined population, possesses no true scale properties, possessing neither a true zero or equal intervals throughout the scale. This deficiency obstructs the development of a true natural science of mental ability. The present burgeoning interest in understanding individual differences in mental abilities in terms of the natural sciences, biology and the brain sciences in particular, demands direct measures that functionally link brain and behavior. One such natural ratio scale is time itself - the time it takes the brain to perform some elementary cognitive task, measured in milliseconds.

After more than 25 years researching MC, Jensen here presents results on an absolute scale showing times for intake of visual and auditory information, for accessing short-term and long-term memory, and other cognitive skills, as a function of age, at yearly intervals from 3 to 80 years. The possible uses of MC in neurological diagnosis and the monitoring of drug effects on cognition, the chronometric study of special time-sensitive talents such as musical performance, and presents a theory of general intelligence, or g, as a function of the rate of oscillation of neural action potentials as measured by chronometric methods. Finally, Jensen urges the world-wide standardization of chronometric methods as necessary for advancing MC as a crucial branch of biopsychological science.