Is ADHD related to a poor internal mental clock? 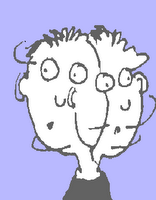 I just ran across a 2004 study that examined prospective (reproducing a 30 second time interval) and retrospective (how long did a task take?) time judgements in children with reading disorders and ADHD (RD and ADHD groups).

Although prior research with ADHD subjects has implicated deficient mental/interval time-keeping (at the milisecond level--see introduction/review of lit in actual article--see below) as a potentail causal mechanism for ADHD, the current study attempted to determine if ADHD subjects, consistent with Barkley's ADHD impaired behavioral inhibition conceptualization (which articulates four primary self-regulation subsystems--working memory and sense of time, internalization of speech, affect regulation, and "reconstitution" or the formation of novel, complex behavioral sequences), differed from RD subjects in more "everday" time perception/judgments.

With regard to the focus of Tick Tock Talk: The IQ Brain Clock blog, the most interesting finding was a difference between RD and ADHD subjects in retrospective time estimation. As stated by the authors: